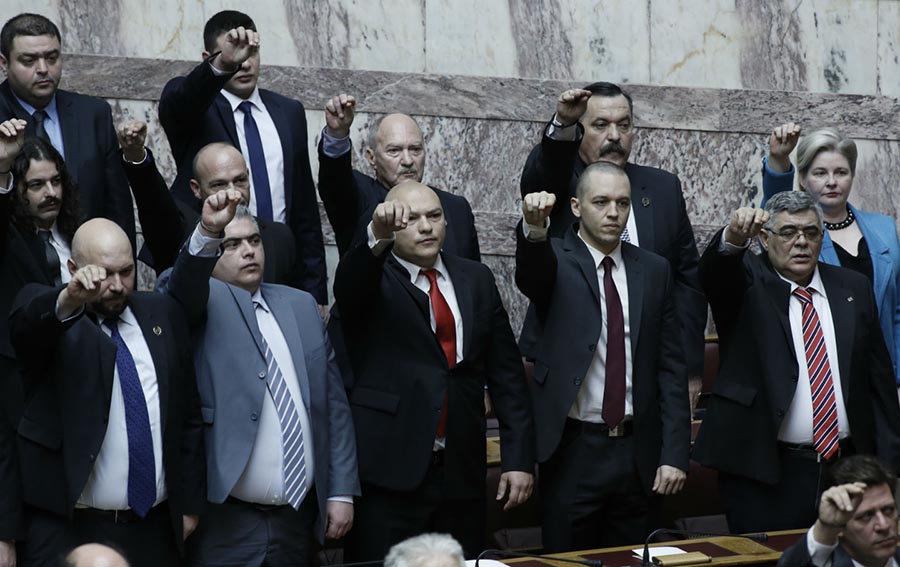 On Friday, the atmosphere during the Greek Parliament’s no-confidence vote over the name agreement reached a boiling point when Golden Dawn MP Konstantinos Barbarousis called on the military to arrest the country’s leaders for treason of national interests and called for them to be publicly liquidated in Prespa. “As the country’s political leadership is not legislating in the nation’s interests but in its own interests, I call on the country’s military leadership to respect its oath and to arrest Prime Minister Alexis Tsipras, Panos Kammenos and Prokopis Pavlopoulos to avert this treason,” he stated. In response, PS Nikos Voutsis said the masks in Parliament had fallen. According to him, Golden Dawn called for a coup against the political system, with consent from the majority of its parliamentary group. “I request for Golden Dawn to no longer get a right to address because we need to send from Greek Parliament a message of unity and condemnation of fascism,” he stated. Golden Dawn MPs were expressly removed from the session. Later on, the surprising information arrived that Barbarousis had been expelled from the party as punishment for the coup call. What was also surprising was the address in Macedonian delivered by Georgios Oursouzidis, a member of SYRIZA who comes from the northern part of Greece. As it had been announced, the 3-day protest outside Parliament to defend Macedonia’s name and against the name agreement started in the morning. “There is no other Macedonia. Macedonia is one and Greek. We won’t allow this devastating agreement to be accepted,” a participant said.