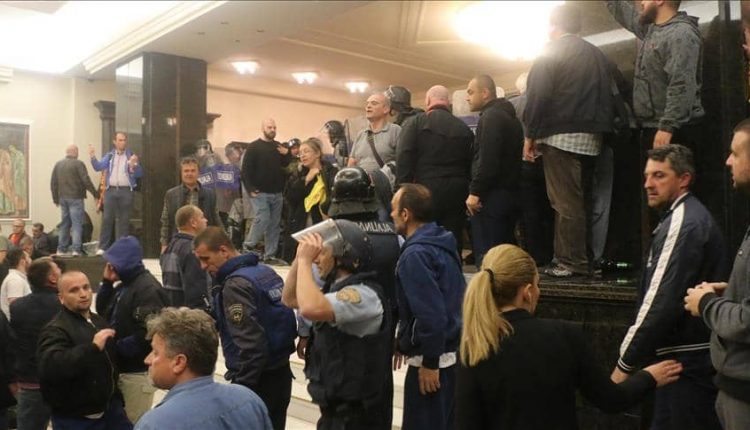 The trial over the 27 April 2017 attacks in Parliament continued on Tuesday. In the messages found during the expertise of former Parliament Speaker Trajko Veljanoski, Viber communication has been found in which the then-leader of VMRO-DPMNE, Nikola Gruevski, on 26 April 2017, forwarded a message to Veljanoski that he had received from the then-Director of the Public Security Bureau, Mitko Cavkov, notifying him that he had received information from a local colleague who was an ethnic Albanian that preparations were underway to vote through a Speaker. “From Cavkov: Good morning, director, let me notify you that I’ve now received info from a loyal colleague who is an Albanian that something is planned to be done in Parliament by this other side, whether an incident whether forcibly, voting through a Speaker or something similar. I don’t have more concrete information, if I do, I will call you,” Gruevski writes to Veljanoski, forwarding the message sent from Cavkov, who is one of the defendants in the case. Other Viber messages and texts from Veljanoski’s phone were presented at the hearing. Based on one of the messages, Gruevski told Veljanoski at 4 pm that the plan was for Talat Xhaferi to be elected after 5 pm upon an initiative from SDSM. As it is explained, the information had been given to Gruevski by Pance Kralev.