First debate on Amendments for Constitutional Changes held in Government 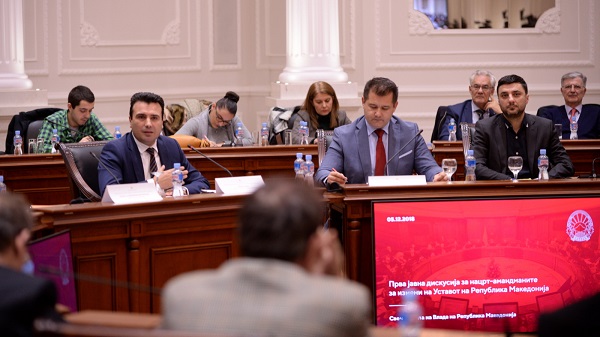 The Government of Macedonia held the first public debate on the amendments for changes to the Constitution of Macedonia, which were recently endorsed by the Parliament. Main speakers at the debate were PM Zoran Zaev, university professor and former Foreign Minister Ljubomir Frckoski and university professor Vlado Popovski. Frckoski and Popovski are also one of the co-authors of the Constitution of Macedonia. “It is possible for us to accept some suggestions made by the MPs for changes in the texts of the amendments. For example, there is a suggestion for changes to the Amendment XXXIV which focuses on the Constitution’s preamble, to also include the reference “…and the citizens which are part of the Albanian people”. We are constantly consulting Greece about these changes, and vice versa. I am glad that more citizens accept this process day by day, but still I think it should be clarified to them better,” Zaev said. Frcoski said that the amendments do not endanger the civil base of the country, and that all resolutions included in them are in accordance with all constitutional-legal standards, while professor Popovski presented suggestions about defining the Macedonian people in the preamble of the Constitution more precisely. The debate was attended by politicians, professors, experts and citizens.