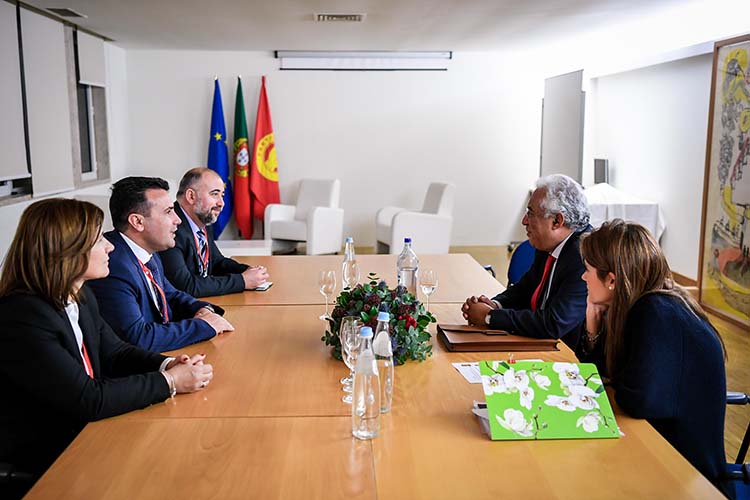 The PM Zoran Zaev, during his official visit to Portugal for the Congress of the Party of European Socialists, met the Portuguese PM Antonio Costa, making this the first ever meeting between PMs of the two countries. At the meeting, Zaev informed Costa about the ongoing political events in Macedonia and the entire Balkan region, accenting the positive approach of Macedonia towards improving the relations with all of its neighbouring countries, singling out the agreements reached with Bulgaria and Greece. Portuguese PM Costa voiced support to the Prespa Agreement, and by extension, Macedonia’s membership in NATO and EU. Answering journalists’ questions after the meeting, Zaev said that he is certain that all processes for implementation of the Prespa Agreement will be conducted successfully. “The public debate in the Macedonian Parliament about this issue is rather constructive and of high quality, making me certain that we will provide the 2/3 majority required for adoption of the agreement. This agreement will resolve and close the bilateral issues we have with Greece, just like we did with the Good-neighbourliness Agreement we signed with Bulgaria. If all is done the way it should, then Macedonia will start the accession negotiations with NATO in June 2019,” Zaev said. Referring the case with the fleeing of former Macedonian PM Nikola Gruevski, Zaev said that he hopes that Hungary will extradite him to Macedonia, estimating the fact that Hungary, a NATO and EU member, granted asylum to Gruevski, is a bad signal for Macedonia which is a candidate for membership in these alliances.