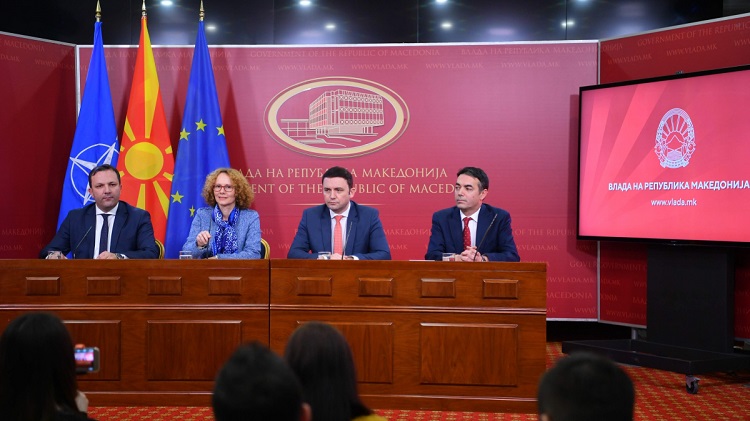 The Vice-PMs of the Macedonian Government, Radmila Sekerinska, Bujar Osmani, Nikola Dimitrov and Oliver Spasovski held on Tuesday a press conference related to Macedonia’s integration in EU. “We’re expecting to have our own seat in NATO in the next two weeks and I expect this to spark positive reactions in the country. The process of reconciliation and building friendships in the region has no other alternatives,” Sekerinska said. Macedonia’s Foreign Minister Nikola Dimitrov said that this protocol is expected to be signed this week or at the start of next week. “NATO’s accession protocol is expected to be signed this week or next week. Afterwards, it will be sent to the Greek parliament for ratification. We hope that our friends, Lithuania among the first ones, will ratify the protocol in their respective parliaments. As soon as the protocol is ratified by the Greek parliament, we will have a seat within the Alliance,” Dimitrov said. Vice-PM for European Affairs Bujar Osmani expects that Macedonia would open the first chapter of the membership negotiations with during the Croatian Presidency of the EU, evaluating that Prespa Agreement as a “diplomatic miracle” that will encourage resolution of other bilateral disputes in the Balkan region.