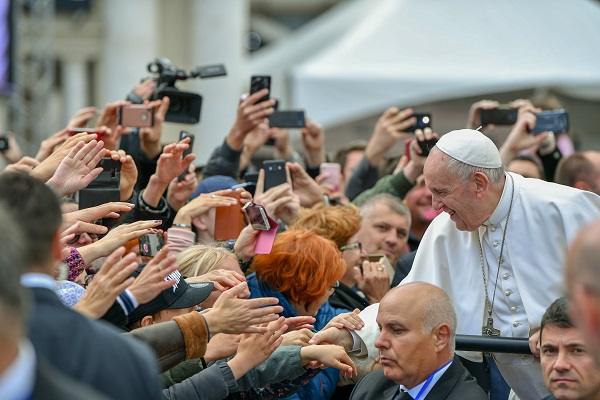 The Sovereign of the Vatican City State and the Head of the Catholic Church Pope Francis visited Skopje on Tuesday. The Pope was welcome at the Skopje Airport by the PM Zoran Zaev, after which he headed towards the presidential residence on Vodno Mountain in Skopje, where he met the current President of Macedonia Gjorge Ivanov and the newly elected President Stevo Pendarovski, along with other state officials and foreign diplomats to Macedonia. He then paid visit to the memorial house dedicated to Mother Teresa, which Pope Francis himself declared a saint two years ago. There, the Pope met and blessed citizens coming from socially endangered categories, like poor people, people with disabilities, single parents etc. The Pope’s visit culminated with a mass at the Macedonia square in Skopje, which was attended by over 15,000 people, from Macedonia and from abroad. Pope Francis blessed the attendants. “The multiplication of your mercy, which can break down our stereotypes and communicate the Father’s compassion for each person, especially those for whom no one cares: the forgotten or despised,” the Pope said. He then proceeded with giving his homily to the citizens. “Let us not be afraid to say it clearly: Lord, we are hungry. We are hungry, Lord, for the bread of your word, which can open up our insularity and our solitude. We are hungry, Lord, for an experience of fraternity in which indifference, dishonour and ignominy will not fill our tables or take pride of place in our homes. We are hungry, Lord, for encounters where your word can raise hope, awaken tenderness and sensitize the heart by opening paths of transformation and conversion. Brothers and sisters, today the Risen Lord continues to walk among us, in the midst of our daily life and experience. Let us encourage one another to get up and experience the abundance of his love. Let us allow him to satisfy our hunger and thirst: in the sacrament of the altar and in the sacrament of our brothers and sisters,” the Pope spoke during the mass in Skopje. The Pope’s official visit to Macedonia concluded with a meeting with priests and their families, as well as other citizens of the Catholic Faith at the Catholic Church Holy Heart of Jesus in Skopje. “When a young person has no dreams, they feel empty and hopeless inside. Please, avoid that; everyday problems and challenges should not discourage you. Just focus on your greatest dreams. Our world is divided because we ourselves suffer divisions. We need to create a new world, and for that, we need the inclusion of young people. Use every chance you get, and do not be afraid to make mistakes. Do not turn yourselves in lifeless creatures fearing to make risks in life. We, as Christians, should live in harmony with everybody, with all our neighbours, and you have the greatest example for that coming from your country; it’s the Saint Mother Teresa of Calcutta,” Pope Francis said to the citizens in the Catholic Church. The Pope left Macedonia, departing from the Skopje Airport, around 06:30 p.m.