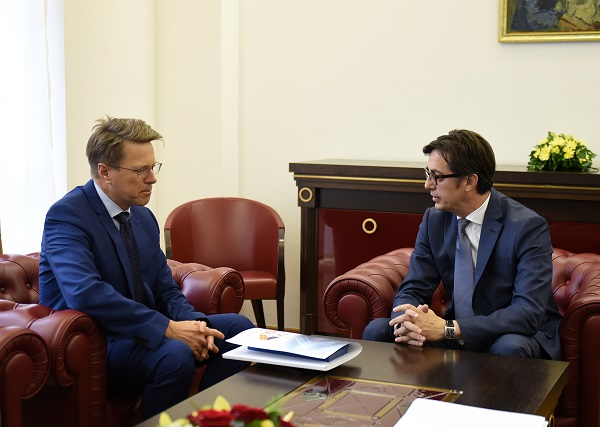 The EU Ambassador to Macedonia, Samuel Zbogar, held a meeting on Monday with new President Stevo Pendarovski, expressing hope for successful cooperation in the days and months ahead on Macedonia’s road to EU integration. As Zbogar added, he’s encouraged by Pendarovski’s messages about reconciliation, extending an arm and unification of all political forces in the country. Pendarovski, according to the President’s Cabinet, stated that a start of EU membership negotiations was deserved and necessary in order for overall reforms to be encouraged, as well as to advance political culture in the country. The President expects EU members’ leaders to be principled and consistent with the made promises, as well as to valorise the work that’s been done. The same day, Zbogar also met with Gordana Siljanovska Davkova, the defeated candidate in the second round of the presidential elections. “With Siljanovska Davkova, we agreed future of the country is in EU. A lot of work still needed to bring EU into daily lives of people. Me and my office will tirelessly support all citizens of North Macedonia to achieve this objective,” the EU Ambassador said on Twitter.