Pendarovski: North Macedonia has no Plan B for EU Membership Negotiations 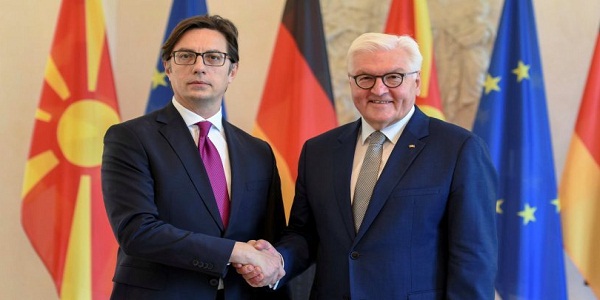 The President of Macedonia Stevo Pendarovski, who is paying an official visit to Germany, met on Tuesday with the German President Frank-Walter Steinmeier. At the meeting, the interlocutors exchanged opinions on the ongoing political events, focusing on the cooperation between Macedonia and Germany, with both of them estimating that the bilateral relations are very good. Pendarovski thanked Steinmeier for all the support Germany provides to Macedonia in the processes for integration in the EU, as well as for the economic support. In meantime, in an interview for the electronic edition of the German newspaper “Spiegel”, Pendarovski says that there are no alternatives for Macedonia but starting of the membership negotiations with the EU till the end of 2019. “The Prespa Agreement required a lot of courage and political will for its implementation, and I believe Germany has recognised that. This is very important for us, because we have no plan B. Our plan B is starting of the membership negotiations with the EU no later than this October. We would like to believe that the current delays are of technical nature and will be overcome in due time,” Pendarovski told “Spiegel”.

2019-06-26
Sasko Golov
Previous: Zaev: I took over Finance Ministry to control Ultimate Financial Measures
Next: Hutchinson: US Senate to ratify NATO Protocol for Macedonia this Summer