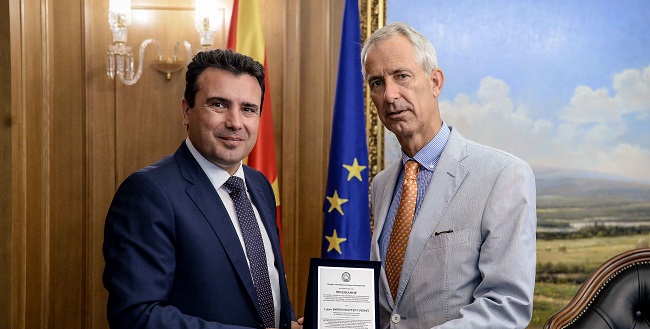 The PM Zoran Zaev met on Wednesday in the government the Dutch Ambassador to Macedonia Willem Wouter Plomp. As the governmental press service informs, the interlocutors spoke about the bilateral relations between Macedonia and the Netherlands, with PM Zaev saying that the cooperation has greatly improved in the past two years. “At the moment we are fully focused on the integration of our country in NATO and EU. We also remain dedicated to implementation of reforms, political and economic, in order to improve the living standard of the citizens,” Zaev said. Plomp, whose mandate as Ambassador to Macedonia is about to be concluded, reaffirmed the Dutch support for Macedonia’s integration in NATO and EU, as well as for the economic development.