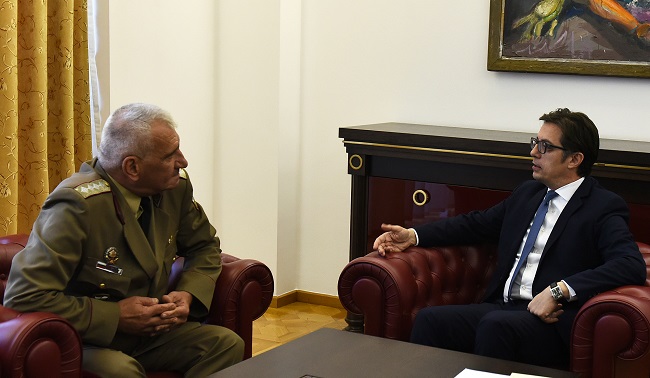 The Chief of the Defence of Bulgaria, General Andrey Botsev, paid an official visit to Macedonia, attending the celebration of the 27-year jubilee of the Macedonian Army (ARM). Botsev was welcomed by the Chief of Staff of ARM General Vasko Gjurcinovski, and held meetings with the President of Macedonia and Supreme Commander of ARM Stevo Pendarovski and Deputy PM and Defence Minister Radmila Sekerinska. Gjurcinovski thanked Botsev for the ongoing good cooperation between the armies of both countries, while Sekerinska extended gratitude on behalf of the Macedonian government for the ratification of the NATO Protocol for Accession of Macedonia by the Bulgarian Parliament. Botsev told Sekerinska and Gjurcinovski that the cooperation between the armies of Macedonia and Bulgaria will intensify in the upcoming years, with numerous mutual trainings, exercises and projects. General Botsev also met President Pendarovski, with whom he spoke about the cooperation between Macedonia and Bulgaria in general, with Pendarovski concluding that Macedonia can use and apply Bulgarian experiences in processes like the integration of the country in NATO.