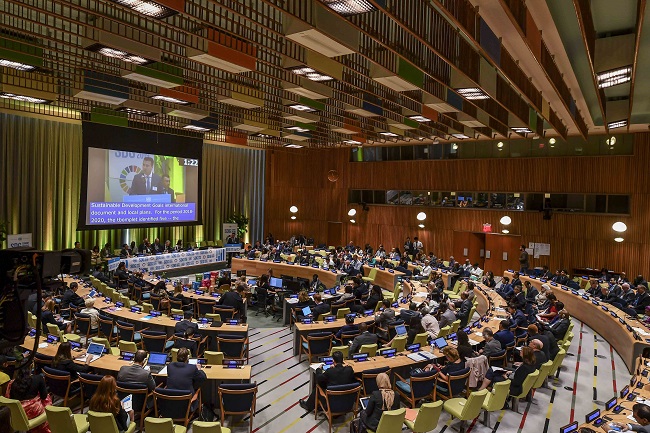 The Macedonian delegation continued its activities in New York. PM Zoran Zaev held a meeting with his counterpart from Malta, Joseph Muscat, who said his country strongly supported a date for Macedonia in October. The meeting also focused on the Malta-Macedonia relations. In the US city, Zaev also met with Irish counterpart Leo Varadkar, as well as with his counterpart from Belgium and the future President of the European Commission, Charles Michel. Furthermore, Zaev delivered an address at the Leaders Dialogue within the frameworks of the Forum at the highest level of the SDG Summit, as part of the 74th UN General Assembly’s programme. As he said, adoption and implementation of the universal and transformative agenda for sustainable development is of exceptional importance in a world of changes so deep and quick that no country can stand alone. FM Nikola Dimitrov, who is part of the Macedonian delegation, too, took part in a meeting with counterparts Ekaterina Zaharieva (Bulgaria), Nikos Dendias (Greece), Ramona Manescu and Gordan Grlic Radman (Croatia). Dimitrov’s counterparts expressed support for EU membership for Macedonia and Albania. As Bulgaria’s Foreign Ministry said, the four politicians reviewed the European integration path of the neighbouring candidate countries. “We’re convinced that we will be more secure, more prosperous and richer only if all our neighbours become EU members,” the Bulgarian FM said. According to Zaharieva, it’s now time for her country, Romania and Croatia to help other countries in the region join the EU, something which Greece did during those three’s integration. Dimitrov also took part in a working breakfast of FMs of countries that are part of the South-East European Cooperation Process, which was organised by Kosovo.