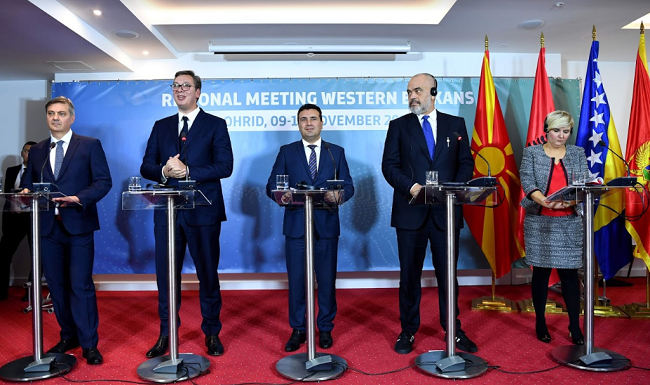 PM Zoran Zaev, together with his Albanian colleague Edi Rama and the Serbian President, Aleksandar Vucic confirmed their declaration in Ohrid this weekend with the priority list and measures for improvement regional cooperation. The declaration follows their previous joint meeting held in Novi Sad. The Government informs that the basis of the declaration centres around cooperation, joint work and elimination of all obstacles for free movement of people, goods, services and capital, as contribution for the citizens of all countries in the region toward accomplishing the joint goal – full-fledged membership into EU. “We talked about how to hasten the fulfilment of our citizens’ dream to bring the Western Balkans to the 21st century. A region in which the citizens, especially the youth will recognize their future potential. An action plan with priorities to which we will dedicate to in the upcoming period is securing conditions for free movement for the citizens with only personal IDs. Additionally, for creating preconditions for 24-hour work of the customs controls in one point and for mutual respect of phytosanitary controls of goods which move through the region in order to secure fast and safe transport, to reach the markets in optimal time which will be enabled by the fast tracks for the trucks,” underlined PM Zaev. He also adds that he is convinced that these efforts are in support of the country’s ambition of EU membership and that the initiative and measures will cause positive attention by EU and the EU member states. The remaining leaders at the press-conference also agreed that this initiative and agreed measures are of high meaning for the future development of regional cooperation in the areas of mutual interest and expressed optimistic expectations for participation of the remaining Western Balkan countries at the next regional meeting in Drac the following month. Zaev, Vucic and Rama assure that the measures are not toward the creation of a new Yugoslavia, nor Great Albania, but a region which will be a better place to live.