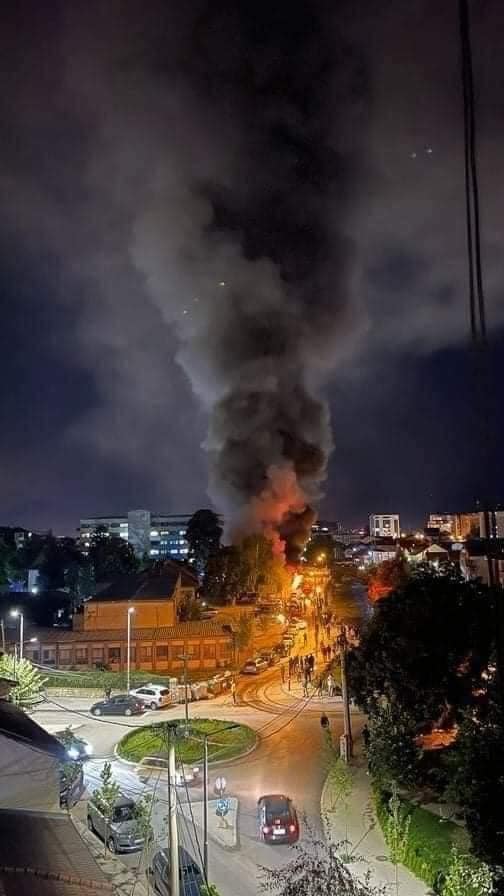 “The actions taken by the five prosecutors to determine the cause of the fire at the Modular COVID Hospital in Tetovo in which 14 people lost their lives, continue,” said the Public Prosecutor’s Office. They point out that orders had been issued for a forensic autopsy and identification of the bodies of the deceased to the Institute of Forensic Medicine, Criminology and Medical Deontology at the Medical Faculty in Skopje. “From the reports submitted to the prosecution, it is determined that of the dead, eight victims are female and six male, aged 29 to 78 years. Twelve of them were hospitalized as patients at the COVID Hospital. Of the dead, two people, patient’s wife and another patient’s daughter, are outsiders who were not hospitalized,” added the Public Prosecutor’s Office. The Prosecution pointed out that the reason for their presence at the time of the accident, whether they were present at the hospital for a longer period of time or went inside after the fire to evacuate their relatives, is being investigated. “By order of the prosecution, an autopsy was performed on the deceased patient, who died from COVID-19 and whose life was fought by the medical staff just before the outbreak of the fire. The body of the already deceased patient was taken out at the moment of the outbreak of the fire. The autopsy, at the request of the prosecution, was performed to determine the exact causes of death, and it was concluded that the death was not a consequence of the fire,” said the Public Prosecutor’s Office. They also took measures to provide video recordings from the PHI Clinical Hospital in Tetovo, from and around the hospital, surrounding business buildings, residential buildings, houses, as well as providing the entire video material posted, both by individuals and from social networks. The recordings are being examined on orders issued by the prosecution and the reports from their analysis are expected to help clear up the event. Orders were brought to OKTIV-Skopje for collecting material evidence and securing the traces from the scene, as well as orders for their expertise, in order to determine the cause-and-effect relationship for the fire. In that direction, an order was issued to hire expert in the field of electrical engineering, who was present in the field, at the burned building and whose expertise will answer questions about the cause-and-effect relationship for the fire. “Some of the witnesses from the scene were interviewed, part of the medical staff who were present at the Modular COVID Hospital on the night when the fire broke out. In the meantime, other persons who can provide information regarding the fire have been questioned,” informed BPPO. The Prosecutor’s Office issued an order to SIA-Tetovo to confiscate the entire documentation related to the construction of the modular hospital, from the hospital itself, and also from the legal entity – the contractor of the construction. The Basic Public Prosecutor’s Office in Tetovo, in cooperation with the Basic Public Prosecutor’s Office in Skopje, undertakes necessary measures and activities to check for possible omissions by the responsible persons regarding the observance of the regulations at work, and, inter alia, the regulations in the field of fire protection.