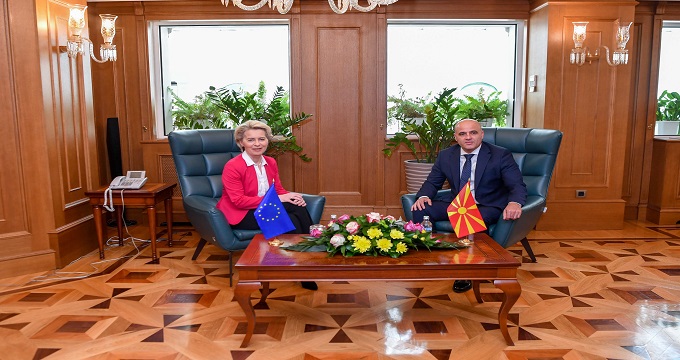 President of the European Commission (EC) Ursula von der Leyen paid an official visit to Skopje on Thursday, during which she attended and addressed the parliamentary session over the French proposal, and before that held meetings with Foreign Affairs Minister Bujar Osmani, President Stevo Pendarovski, Prime Minister Dimitar Kovacevski and VMRO-DPMNE Leader Hristijan Mickoski. Von der Leyen was welcomed in Skopje by FM Osmani, who thanked her for her visit in this crucial time for the country, adding that the EC has always been a great partner and supporter of North Macedonia, and Von der Leyen said that that support will continue when the country starts the EU accession talks. At her meeting with President Pendarovski, Von der Leyen explained that the accession talks and the screening process for North Macedonia will start immediately after the country adopts the French proposal, adding that this will include signing of bilateral agreements between the country and the EU in Macedonian language. President Pendarovski said that the Macedonian language and national identity must remain protected in the entire process. Later, the EC President also held a meeting with PM Kovacevski, with whom she agreed that the French proposal does not compromise the Macedonian language, and that this is the right moment for North Macedonia to grab the unique opportunity to start the EU accession talks. They both agreed that having in mind the current situation in Europe, the enlargement of the EU is of crucial importance, especially for the Western Balkans and Eastern Europe. Von der Leyen also met Parliament Speaker Talat Xhaferi, with whom she discussed parliamentary procedures concerning the French proposal, with both of them agreeing that it serves the best interests of the country and its European agenda. At the meeting in the headquarters of VMRO-DPMNE, party leader Hristijan Mickoski spoke to Von der Leyen about several dilemmas concerning the French proposal. As Mickoski explained, Article 11 of the EU Common Position states that the country will not start the accession talks before the Constitution is changed to include Bulgarians, the protocol form Article 14 which allegedly brings into question the history of North Macedonia and its people, and Article 3 which states that the negotiations framework will be translated into Macedonia, but Bulgaria will provide a unilateral statement with its views about the Macedonian language, i.e. that it is a dialect of Bulgarian. Mickoski also showed Von der Leyen photos of the graves of the boys murdered by the Bulgarian army near Vatasa in World War I, national hero Vera Ciriviri-Trena who has also been murdered by Bulgarian soldiers in that period, as well as coaches full of Macedonian Jews that were deported to concentration camps by Bulgarian authorities in World War II.