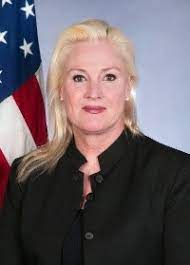 US Ambassador to North Macedonia Angela Price Aggeler discussed in an interview with Sitel TV the current conditions in the judiciary in North Macedonia, as well as the state’s efforts in the fight against corruption. “I found and still find as rather confusing the process for election of a new head of the Basic Public Prosecutor’s Office for Organised Crime and Corruption (BPPOOCC). After all the support the US provided for development of the judicial sector, the results we witness and the extremely low trust of citizens in the judiciary is very disappointing. We speak about millions and millions of dollars from the tax-payers in the US provided for improvement of the judiciary in North Macedonia, and the citizens of this country deserve to see positive results from those investments. When it comes to my opinion about the presence of corruption in the country, I can say that it is a mere reflection of what the citizens are actually saying, that the corruption is probably the greatest problem North Macedonia deals with. The country started the process for integration in the EU, and in order to implement all reforms and reach the desired progress, it has to tackle the problem with corruption head on and with full force,” Ambassador Aggeler said. Referring to the process for integration of North Macedonia in the EU, Aggeler said that the US continue to support the EU-integration of the country. “When it comes to the changes to the Constitution, I believe that those that bring this process into question will look at it a bit better in order to see what is best for the country,” Aggeler said.